Nominated by Aboriginal Financial Institutions (AFIs), these awards showcase the strength and resilience of First Nations, Inuit and Métis entrepreneurs across Canada. NACCA CEO Shannin Metatawabin is clear that, “by any standard, Indigenous entrepreneurs impact more than just the bottom line. All six winners have a substantial impact on their local community, not only through employment but the larger social impact of improved health, bringing pride to families, and building local economies.”

For the 2019 NACCA Indigenous Business Awards of Excellence there are four categories, and the first award was presented by the Honourable Mary Ng, Minister of Small Business and Export Promotion.  She proudly presented Shelley Stewart with the Indigenous Woman Entrepreneur Award of Excellence.  Shelley, a member of the Upper Nicola Band in BC, owns and manages Bar S Ventures, which operates trucks and equipment in the logging industry.

The second award of the evening was for the Indigenous Community Business of the Year.  This was presented by Mr. Michael Denham, CEO at BDC, to our co-winners Hôtel-Musée Premières Nations in Wendake QC, and Askiy Apoy Hauling located in Onion Lake Cree Nation on the border between Saskatchewan and Alberta.

Our final category was Business of the Year and the two co-winners were presented their awards by Jay-Ann Gilfoy, CEO at Vancity Community Investment Bank.  Faron and Tammy Calihoo received their award for Commanchero’s Trucking and Contracting Ltd based in Spruce Grove AB.  Robert and Katherine Tebb, Métis entrepreneurs from Regina, took home the final award as owner/operator of Xtended Hydraulics & Machine.

The NACCA Indigenous Business Awards of Excellence represent an important milestone in the 59 AFIs’ history of working together coast-to-coast-to-coast to help their local communities. AFIs support Indigenous entrepreneurs, with over $100M in loans annually. Over 1250 businesses last year received financing and mentorship support. 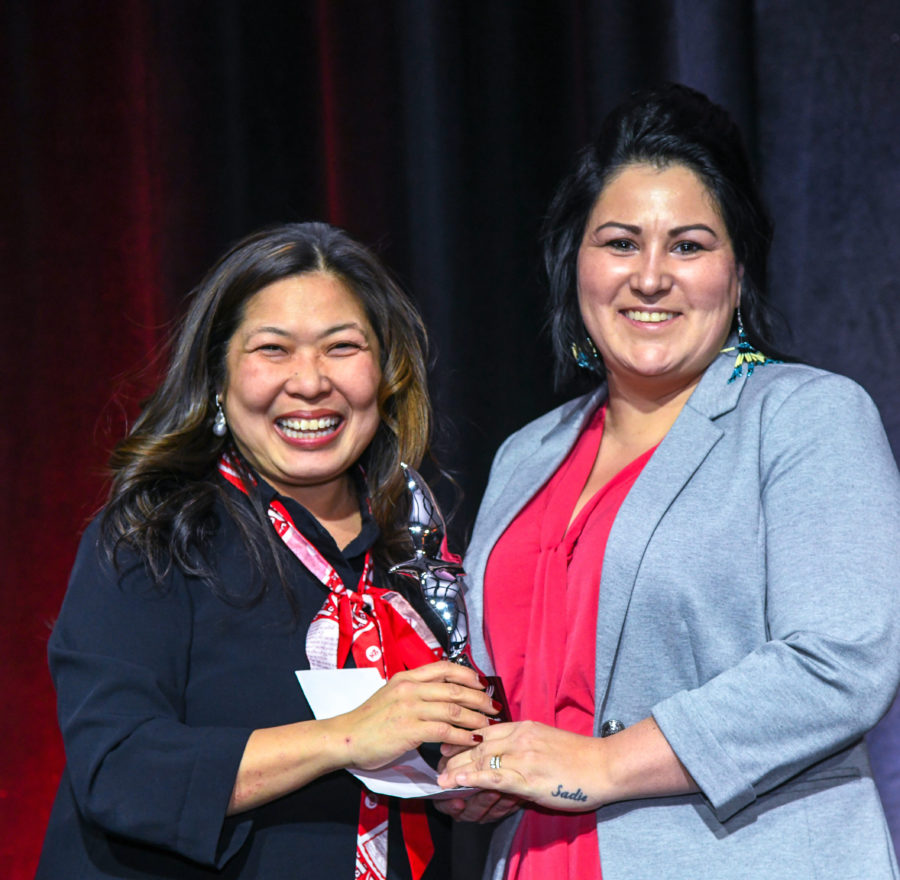 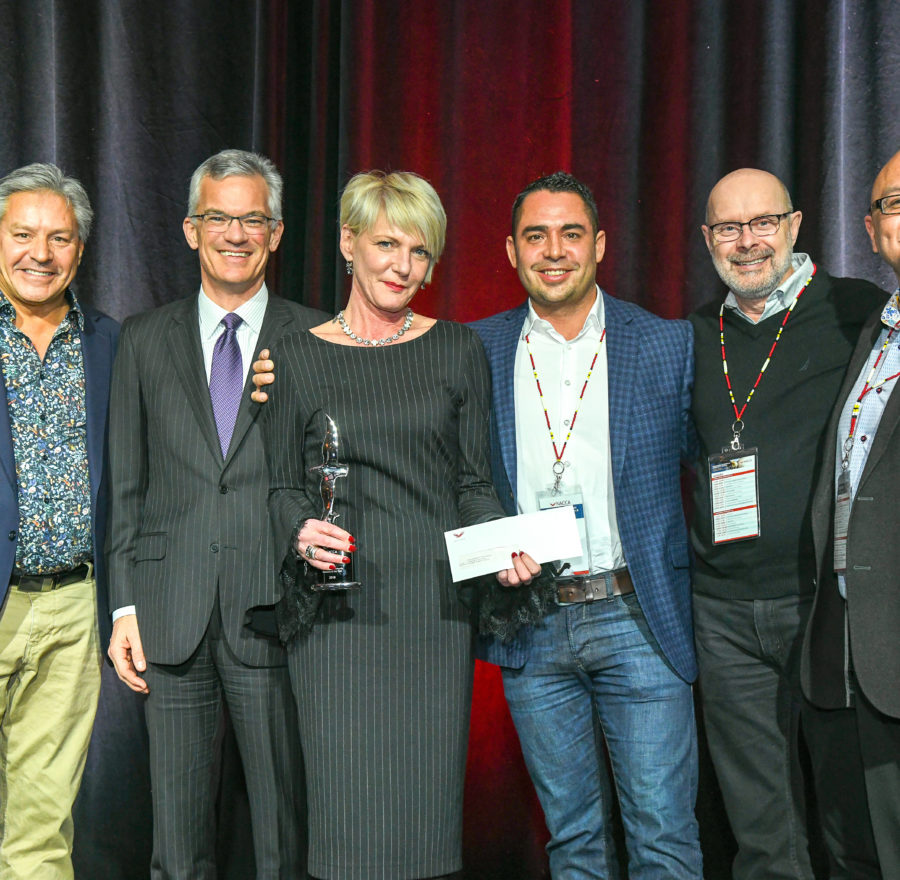 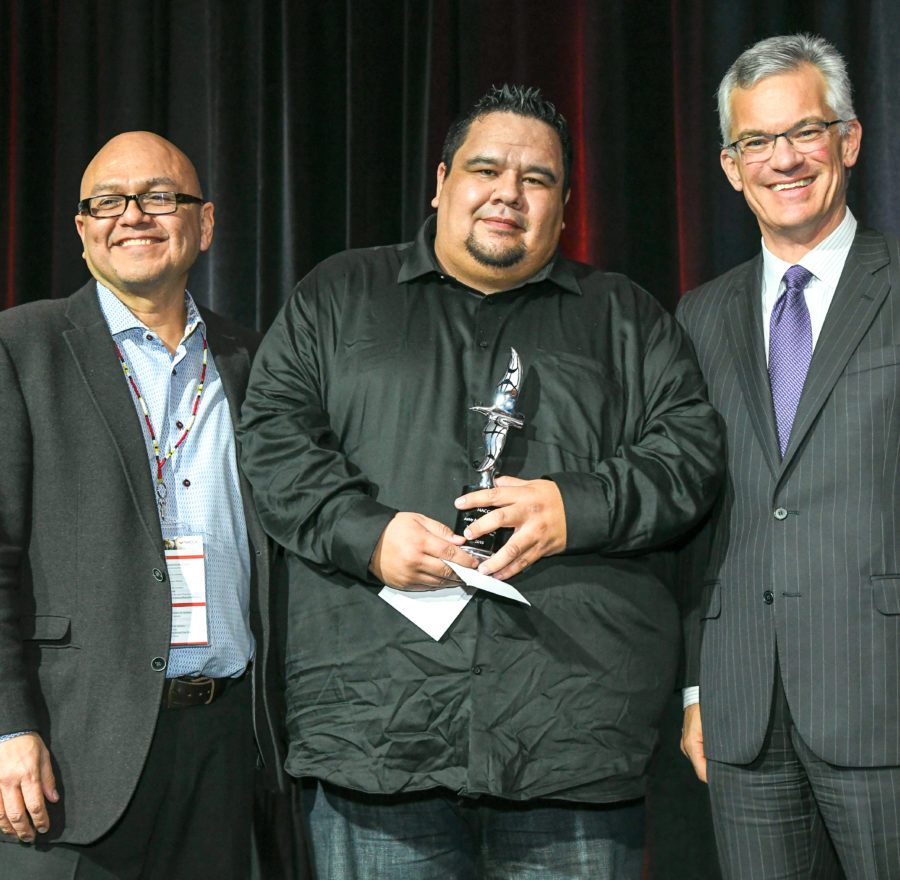 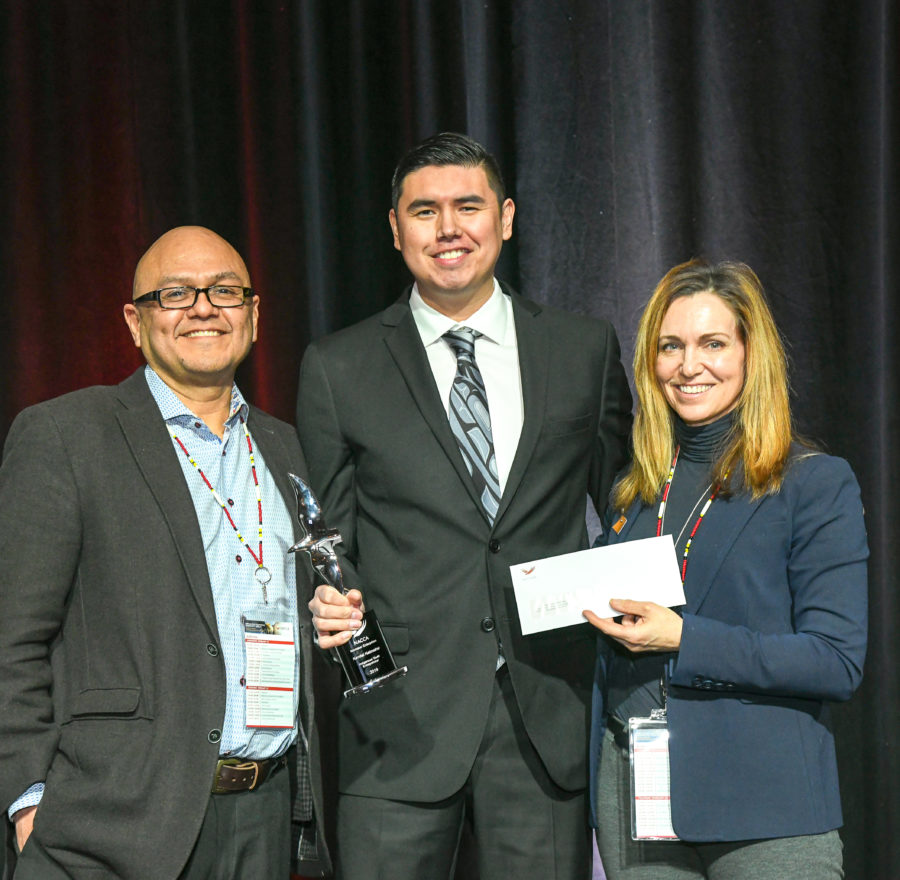 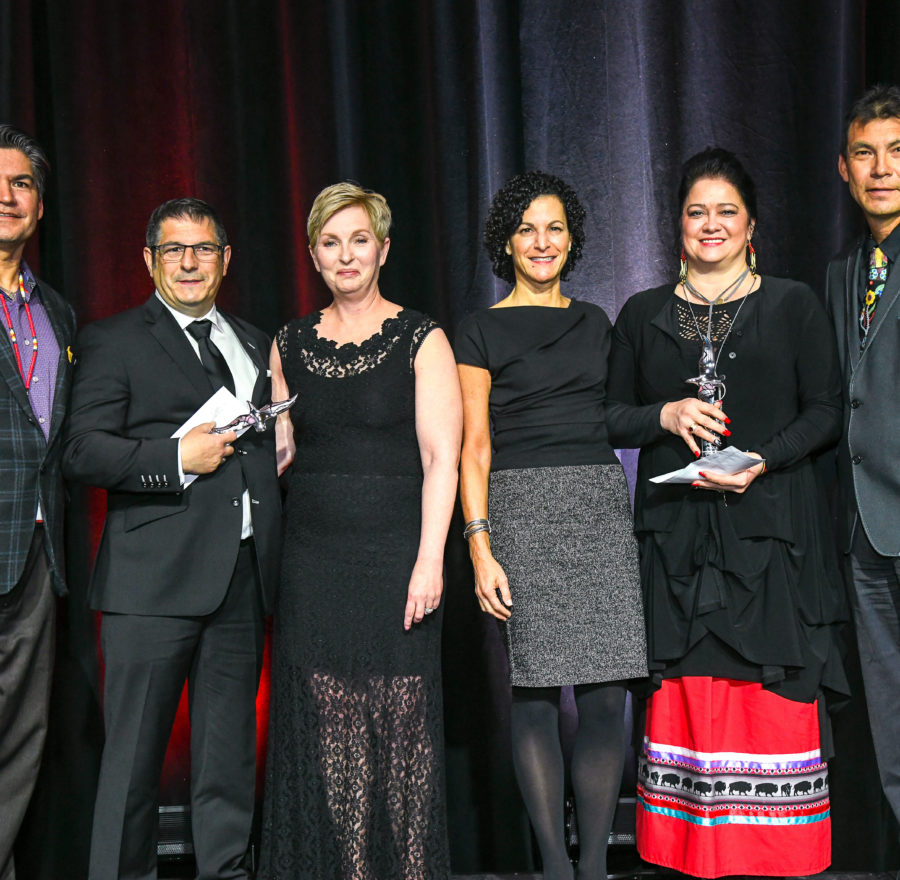 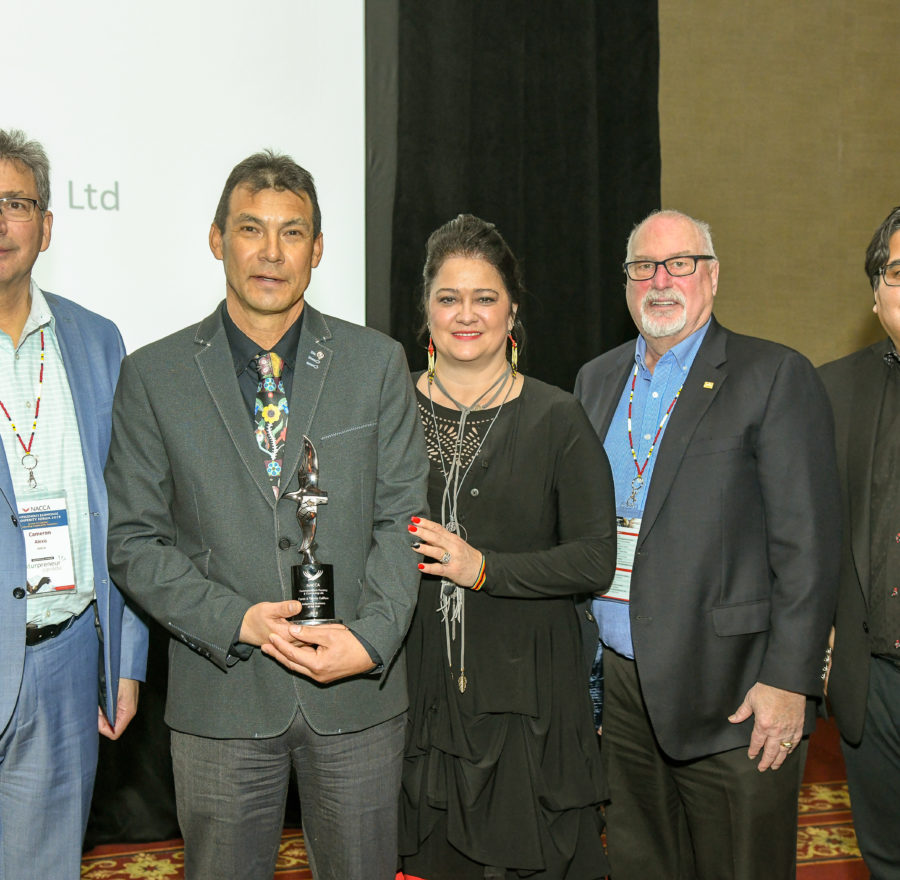 Here is a link to the High-res photos of the winners.  Please let us know if you run with any of these photos.

NACCA is pleased to announce the winners of the 2019 Indigenous Business Awards of Excellence. See below for more details on our winners.

Shelley Stewart, a member of BC’s Upper Nicola Band, has been operating Bar S Ventures as a sole proprietorship since 2004. Shelley’s entrepreneurial spirit started at the age of 17, when she received a developmental loan to start a cow/calf operation. Within two years, she’d paid off the loan and had enough to put a down payment on a logging truck. 15 years later, she is now owns and manages a successful business with 14 pieces of tree harvesting and road building equipment, as well as 10 logging trucks which provides logs to a variety of forest milling operations.

Shelley employs 28 people full-time, of which 50% are First Nations. She most recently managed to survive the 2017-18 wildfire season which negatively impacted logging and led to the closing of some of those businesses. Shelley managed to do this by obtaining a full phase logging contract with Stuwix Resources Ltd., a forest company owned and operated by eight First Nation Bands. She continues to provide high quality product with minimal fibre waste by ensuring that buyers utilize each tree from the trunk to crown. This level of use, demonstrates the company’s utmost respect for the forest and commitment to ensuring a minimal negative impact on the environment; it also explains why earnings for the company have more than doubled from 2015 to 2017.

Shelley is a strong role model to other young Aboriginal women through her commitment to being an entrepreneur in the ranching and logging industries. From accessing her first loan at 17, she then moved on to find equity and other financing to buy a truck at 19, hire her boyfriend (now husband) to drive it and enrolled in an accounting program with the goal of becoming a certified CGA. Along the way to building a diverse logging, ranching and road building business. Shelley has also earned numerous awards including; two Young Entrepreneur of the Year Awards in 2012. As one of her support letter writers notes: “Whether it’s Shelley’s office assistant transitioning to logging truck driver or providing the opportunity for one of the crew members from the construction team to become a self-employed contractor, it’s Shelley’s warm and caring entrepreneurial spirit that has touched and improved the lives of many people.”

Huron Wendat culture and history are central to the business and are featured in everything from the way the business is managed to the Indigenous-inspired art and furnishings found throughout the hotel and guest rooms to the locally-inspired food and refreshments offered in the restaurant. Hôtel-Musée focusses on providing a great customer experience built on a foundation of local history, stories and culture. This foundation is grounded with guidance from a council of Elders and experts to ensure that everything is done in a manner that seeks to celebrate culture and history in ways that reflects pride and dignity. The hotel’s continued success indicates that Hôtel-Musée’s focus on First Nations culture and history authenticity is the key to that success.

Hôtel-Musée’s commitment to community is well represented in its efforts to hire and train local community members in the delivery of its services, the preparation of the cuisine it serves and in delivery of the cultural knowledge sharing and immersive experiences it offers to its guests. The art found in the hotel common areas and guest rooms is created by Indigenous artists and is available for purchase by guests and visitors. Local teas, herbs and spices are well incorporated into cuisines and refreshments it serves. The active participation of hotel employees (85% Indigenous) in the day to day management and operastions ensures that products offered by the hotel are authentic and present the culture and values of First Nations communities accurately and respectfully.

Founded in 2008, Askiy Apoy Hauling, located in the community of Onion Lake Cree Nation on the border between Saskatchewan and Alberta, 100% First Nation owned. The company’s success has been realized by focussing on exceeding customer expectations, delivering professional services that meets the needs of the oil industry while respecting maintenance of the environment and promoting safety of staff, community and clients. First Nation community members form 90% of the company’s employees that consist of 17 full time staff and 25 vehicle owner/operators, with a total of 46 commercial drivers.

Working in an industry which has experienced an extended downturn, Askiy Apoy has maintained a slow and steady approach to growth that has kept employment levels steady and driver turnover low. Diversifying its offering of services to include commercial trailers and maintenance services to local first responder units provides additional stability and autonomy for the business growth.

Askiy Apoy is proactive in creating community wealth by actively seeking enthusiastic community members to train and hire, and by partnering with Lakeland College to train Nation members in professional driver and receive mentoring from qualified owner/operators working in the community. Another partnership with Social Assistance Employment Training services provides an opportunity for students to shadow Askiy Apoy staff and be better prepared for the workforce. In addition, Askiy Apoy is currently in negotiations with Onion Lake Community Futures Development Corporation to create an entrepreneurship program that will assist owner/operators to create and grow their businesses.  Askiy Apoy also gives back to the community through numerous sponsorship activities and its employees assist to betterment of the community by volunteering in activities throughout the First Nation.

Kendal Netmaker, an entrepreneur from Sweetgrass First Nation in Saskatchewan, started Neechie Gear® in 2011 – a lifestyle apparel brand that empowers youth through sports – while studying a the University of Saskatchewan. He ran this business from his one bedroom apartment while he finished University and later expanded into several retail locations and an office headquarters in Saskatoon. The brand is now sold online and in select retail outlets across North America with a percentage of profits going toward increasing participation in sports by underprivelidged youth. He has also supported 19 Indigneous post-secondary students across Canada with cash bursaries.

In 2016, Kendal launched Netmaker Enterprises which focuses on speaking and coaching services and product sales. He has successfully utilized mentoring and social media to increase his marketing abilities and increase sales. In addition to speaking professionally on motivation, leadership and the power of telling your story, Kendal has used the Neechie Gear® platform to author Driven to Succeed and mentor over 40 Indigenous entrepreneurs across Canada.

Today Kendal has 6 contract employees who help him grow Netmaker Enterprises and 1 to 2 staff to manage the online sales. Kendal believes the best way to grow a company is to build and nurture relationships over time. He also believes that shopping will be increasingly done more via online retail platforms and has focussed on e-commerce and digital products in response to this trend.

Since starting Commanchero’s Trucking & Contracting 25 years ago, Faron and Tammy Calihoo have built a business from the one gravel truck to a modern fleet of 12 new gravel trucks and 8 full-time Indigenous employees today. Faron obtained his Class 1 licence at age 18 and spent the next 14 years learning by work for other companies which taught him the two key foundations for success: maintain your equipment and operate it like it is your own.

On opening Commanchero’s, Faron and Tammy put this into practice doing most routine maintenance in-house to ensure maintenance is completed on schedule and with higher quality parts. Operating clean, new and well-maintained equipment has helped to develop a reputation for providing friendly and dependable service, supported by a commitment to high quality control that beats industry delivery standards and means less down time.

Commanchero’s work with local Indigenous communities is based on the commitment to understanding each community’s history, governance structure and economy to build trust, strengthen relationships and build his company brand. Faron and Tammy take the time to visit, meet and respond to the needs of their customers. Faron enhances Commanchero’s brand by taking the time to act as a mentor and by donating time, funds and materials to local schools, youth groups, churches, and local community groups.

In operation since 2013, Xtended Hydraulics & Machine is a full-service machine shop owned by Robert and Katherine Tebb, a Métis entrepreneurs from Regina, Saskatchewan. In 2018, the company moved into a brand new state of the art facility in White City, located just outside Regina. The new facility holds a high capacity hydraulic cylinder manufacturing plant and offers a full range of custom machine and manufacturing services. Xtended Hydraulics has 20 full-time employees, 50% of whom are Indigenous, and employees are long-term with very low turnover due to a work culture that treats employees like family and the vital role they play in the success of Xtended Hydraulics.

Robert places his Métis heritage at the forefront and actively seeks out partnership opportunities with Aboriginal training institutions and pursuing joint ventures with a number of other Indigenous communities. He places a strong focus on employee engagement and happiness, and is actively working with one of the world’s largest potash producer on their Indigenous engagement policies.

Robert is very involved in the local business community and demonstrates this by sitting on three boards and staying actively involved as a member of the Regina Chamber of Commerce. Xtended Hydraulics has maintained many long-term contracts to provide repair services and for the manufacture of hydraulic cylinders and continues to expand their reputation as a world leading hydraulics manufacturer.